This is my dear, dear friend Timothy Williamson. Timothy was the first friend I made when I moved to San Francisco two years ago. In fact, we were already BFFs via email before I moved out west. Timothy's one of the very few people I know who is unapologetic about walking in to a San Francisco leather/crystal meth/Idon'tknowwhatthefucktocallyou bar wearing white loafers, a bowtie, and an irreverent grin. There's never a time when Timothy doesn't look impeccable. He has the best hair in San Francisco, hands down.
We've had over 2,000 drunken conversations about the early 2000s. How has your style evolved from the early 2000s to today?
For starters, my clothes aren't so goddamned tight.  In 2002 I dressed like an irony-drenched sausage, complete with Monica Lewinski's haircut.  Honestly, I'm a terribly lazy dresser so it's probably more remarkable how my style, or at least MO, hasn't changed that much.  I have a habit of picking a uniform and just hoarding a bunch of similar pieces and rotating them.  But the same themes keep popping up: borrowed nostalgia, prep school, class tourism, self-deprecation, Molly Ringwald.
Is your Electroclash garb tucked away in the back of your closet?
Oh god, you've seen my apartment.  I have a hard time editing.  A lot of it's gone, but I kept all of the vintage designer logo stuff.  It's so timelessly vulgar.  I still have neon Christian Dior slap bracelets circa 2001.  And my 70s Gucci shopper tote still proves excellent for occasional beer smuggling.
Jarvis Cocker sits next to you at a bar and asks for a light: would you shit your pants?
Who wouldn't?  The only thing better would be if Tracey Emin sat down on the other side and asked me for money for an abortion.
Tell me about working at a vintage store in Seattle.
On paper it was terrible.  I was the poorest I've been in my adult life, uninsured for the bulk of 7 years, the building would reach 100 degrees in the summer, I had to deal with junkie miscreants on an hourly basis, some of the regular pickers were borderline sociopaths.  And it was the best fucking job I've ever had.  Everyone gives a ton of lip service to independent spirit or whatnot, but cities are inherently expensive places and you don't always have the option to run a business 100 percent by your rules.  The owners were this yuppie stoner couple that made their fortune exporting vintage denim to Japan in the 80s and 90s, but had no desire to run a business anymore.  They also owned the building, so overhead was virtually zero, which meant we could truly do whatever we wanted as long as it made some money.  So I got to work every day with my best friends, and it was like a pop culture museum meets neighborhood clubhouse.  Plus I nearly mastered the fine art of drinking on the job.  It was amazing.
Your feelings on San Francisco "style"?
I get frustrated by the fact that SF can be so rigid when it comes to style.  Body type strongly dictates, at least for faggots, where you drink, who you hang out with, how you dress, who you fuck, etc.  And let's be honest, the daddies run this town.  Which is why I get off on showing up at, say, The Powerhouse dressed like a complete dandy poof.  I mean, don't get me wrong.  I love slumming.  But I'm also totally offended by the notion that "real men" not only don't dress well, but actually go out of their way to be studiously unfashionable.  It's smacks of internalized homophobia.  Fuck you and your cargo shorts. 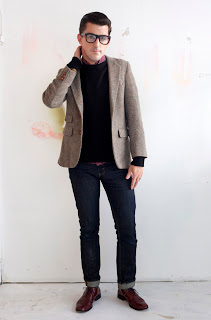 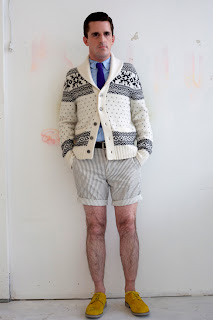 Michael
My name is Michael Laviolette. I'm a twenty-something menswear fanatic. This is a blog dedicated to my love for men's fashion, where you'll not only find me discussing the current state of menswear, but often find profiles of men (and women) whom I find stylish. They're of all shapes and sizes and backgrounds and professions, as people tend to forget being a style enthusiast has nothing to do with a price tag, or svelte figure. I'm inspired by everything from Americana to Suedeheads and boys in hardcore bands. Sorry, but this certainly isn't a place where you'll find a superfluous amount of Dolce and Gabbana. Cheers!